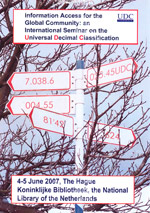 A two day International Seminar on the UDC, organized by the UDC Consortium, was held at the UDC Headquarters in The Hague, 4-5 June 2007. The event's aim was to explore the latest developments and applications of the Universal Decimal Classification. The Seminar brought together UDC publishers, editors of the scheme and UDC users and offered an opportunity for information exchange and discussion of future developments.

There were around seventy participants from over thirty countries including librarians, subject specialists, editors of national editions of the scheme, university lecturers, researchers and LIS students.

The conference programme included eleven invited talks on the topics of user experiences and applications, innovative approaches in UDC use and UDC education and training (see the Programme). Papers were published in the November 2007 issue of Extensions and Corrections to the UDC (EC29). The UDC Consortium chairman Alan Hopkinson and the UDC Editor in Chief Maria Inês Cordeiro invited users to increase their input to the development of the scheme and announced a newly formed international editorial team and a new editorial system that will support the online collaborative input of such a team of UDC revision experts. During 2007, the UDC MRF file will be moved to a new database with extended functionality, including improved and more diversified UDC products which will be derived from it.

The UDC Consortium announced that this successful seminar would be the first in the series of similar events it plans to organize in the future.